Precision Balances Pty Ltd was established, after eight years of in-house and field experience through other outlets, in July 1993 to provide a service for clientele which use weighing systems within their company structure.

The objective of Precision Balances Pty Ltd is to provide quality products and services which consistently meet our customers needs and expectations in the most effective manner.

To achieve this objective Precision Balances Pty Ltd is committed to the implementation and maintenance of a NATA Laboratory accreditation in accordance with the National Association of Testing Authorities in Australia (NATA) to International Standards AS ISO/IEC 17025.

Our aim is to further our activities with the aid of a NATA controlled structure and maintain to be a competitive company.  Education and training in NATA Assurance is provided where necessary to all employee's to supplement testing skills.

Precision Balances Pty Ltd is a sales and service agent for Ohaus Analytical and Toploading Balances and we are also authorised to service Sartorius Weighing Products.

The purpose of this article is to help laboratory balance users evaluate their equipment to determine whether it requires repair, on-site adjustment, or a change in how the equipment is used.

Functional problems fall into either of two categories:

1) Problems that are a matter of adjustment and can be corrected on-site by a field service technician.

2) Problems caused by defective components within the equipment and which indicate that the instrument need to be repaired.

Other problems are the result of environmental factors (see preliminaries) and/or the way the instrument is operated.  The end user can correct these.

Listed below are tests and indicators that you can use to evaluate your laboratory balances:

Drift refers to weight readings that do not stabilize, or unstable readings with or without a weight applied.  All analytical balances show some uncertainty, some do so more than others.  The clearest indication of malfunction is a change in the amount of instability.

Two environmental factors affect the instrument’s stability dramatically being temperature and static charge.  Temperature control is imperative, which includes both control of the weighing room and maintaining the internal temperature of the instrument.  For best stability a change within two degrees of the room is required (day and night).  Always leave the instrument plugged in and turned ON.  Static charge will cause erratic readings; hence controlling the humidity (65%) is important.  Instruments should be operated on a static dissipating surface (anti-static mat).  Operators should stand on anti-static floor covering.  Avoid plastic containers for items being weighed in.  Never replace broken glass doors on instruments with plastic ones.  Eliminate sources of floor vibration and air currents.  On analytical balances with glass doors, be sure the doors are closed fully.  Instruments that have served satisfactorily but suddenly become unstable are likely to need repair.

Repeatability refers to an instrument’s ability to consistently deliver the same weight reading for a given object, and to return to a zero reading after each weighing cycle.  Test this by repeatedly weighing the same object.  The best test is a weight intended for that purpose.  It should match the maximum weighing capacity of each range of the instrument.  When a test weight is not available, an alternative object that is solid, non-porous, dirt free, non-magnetic, and non-static container can be used.  Water in a container is definitely not suitable due to evaporation.  Poor repeatability is often caused by damage to the weighing cell.

Inoperative instruments are those that are either damaged, or clearly not producing weighing results.  Examples are bent, broken, or damaged parts of numerical readouts that are blank, frozen, or nonsensical.  Some instruments are damaged by mishandling or by contamination from liquids or chemicals.  These problems clearly require component level repair.

Cornerload refers to the ability of an instrument to deliver the same weight reading for a given object anywhere on the weighing pan.  Position an object of half the maximum weighing capacity on the weighing pan.  The readings should be the same, within a few digits, at all positions.  Cornerload errors are adjusted during a field service.

Linearity refers to the quality of delivering identical sensitivity throughout the weighing capacity.  Test this characteristic by weighing two stable objects separately, each of approximately one half the weighing capacity.It is imperative that these two weights not be interchanged within this procedure.  Refer to the individual weights as "weight A" and "weight B."

Tare the display.  Place "A" on the pan (at the centre), and record the reading.

Remove "A" and place "B" on the pan next to the centre. Tare the display.

Again place "A" on the pan. Record the reading.

The difference should be less than the advertised tolerance for linearity or accuracy.

Linearity is adjusted during on-site service.

A common error in linearity (accuracy) testing is to simply place test weights on the weighing pan and observe the difference between the indicated weight and the nominal value of the test weight.  This process fails to account for the fact that test weights are imperfect and that the difference between the nominal value and the actual weight might be significant.  This is especially true with analytical balances, where the balance may be more accurate than any standard test weight.  The above procedure nullifies this problem by comparing the weight readings of the same object, both with and without a preload. The accuracy of the test weight is thus immaterial.

Calibration refers to the actual accuracy of an instrument.  To test this yourself you need a test weight with approximately the same or better accuracy as your instrument.  Consider buying more than one, e.g. half and maximum of the weighing capacity of the instrument, in order to test linearity.  Many instruments contain internal calibration weights that are quite accurate, and can be used by the operator routinely.  Check your installation manual.  Calibration is verified and adjusted during on-site service by the field technician with very accurate test weights.

On site service is available throughout Western Australia and The Northern Territory from Precision Balances Pty Ltd by an experienced field technician.  Contact us with any questions about how and where to send your instrument for evaluation and repair.

Principle and Construction of a Electronic Balance

The position detection signal being generated by displacement of the amplifying lever is converted to the current through PID control unit (2) and is supplied to the coil in electromagnetic force generation unit (26).

The current, which is supplied to the coil, is converted to the voltage by output resistor (3) and is conveyed to analog switch (7) after passed through low-pass filter (4).

The weighing and temperature signals, which are supplied to the analog switch, are converted into the digital value by dual-slope A/D converted unit (9).

The CPU (central processor unit) fetches the digitally-converted superimposed data and temperature data.  After executing the compensating process, the weighing value is displayed in display unit (11). 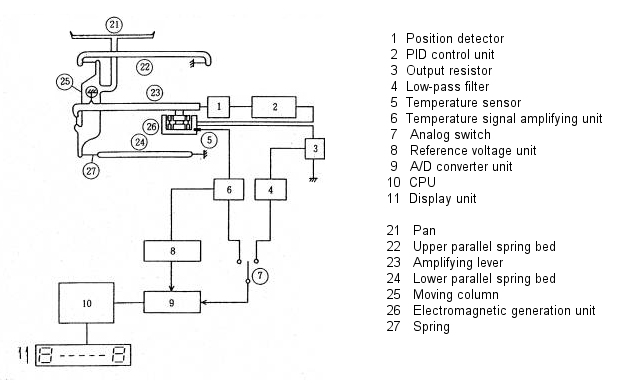 The weights used to test laboratory balances are precision devices and need to be handled accordingly.  When handling weights, avoid direct hand contact with weights by using clean gloves or special lifting tools with non metal tips.  Also avoid sliding weights across any surface, especially across the stainless steel weighing pan of the balance under test. To improve maintaining the actual measured value of calibrated weights it is good practice to place a small piece of paper on the pan first and zero the balance. Remember external calibration is important to keep your readings accurate, so the weights are to be handled correctly.

In order to pass any test of reproducibility an instrument must be operating in an acceptable environment.  A poor environment will degrade the results of a standard deviation (STD) test and falsely suggest that the performance is substandard.  There are several aspects of the environment that impact the performance of a laboratory balance, e.g. gravitational acceleration hence regular calibration is  required.

In the cases of measurements with resolution of 1 milligram and less the force exerted by moving air is readily detectable. A shroud or enclosure around the weighing pan will shield the pan from these effects.  Avoid plastic materials for draft shields.

Static electricity exerts a mechanical force which is readily detectable by analytical and microbalances.  An example of static electricity exerting a mechanical force would be lint sticky to clothing.  Static will be a problem when it exists on the object being weighed, on the person using the balance, on draft shields, or on weighing vessels.  Sources of static are carpets, Vibrum shoe soles, plastic draft shields, plastic weighing vessels, and melamine (Formica) tabletops.  Low ambient humidity exacerbates static problems.

You can test for a static problem easily.  On an analytical balance place a metal enclosure (a coffee can works well) over the weighing pan, so that the pan is enclosed by the can but NOT touched by it.  If the weight readings stabilize with the can in place, then static may be the cause of the instability.  Notice that the coffee can provides an effective draft shield too.

Many laboratory balances are extremely sensitive to vibration or movement.  If the weight readings change as you walk around the instrument, or if the readings change as you lean on the table or move objects on the table, then the table and floor are affecting weight readings.   You can minimize these effects by using an especially sturdy table and minimizing movement.  Users of microbalances often need specially built marble tables on their own foundation.